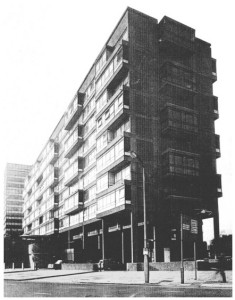 Perronet House soon after completion in 1970

Perronet House was designed by the celebrated architect Sir Roger Walters KBE (31 March 1917 – 11 September 2010) commissioned by the Greater London Council and built in 1969 for Southwark Council by Lavender McMillan and completed by Hawkins. It was one of the last mid twentieth century comprehensive redevelopments at the Elephant and Castle that had begun a decade earlier with the construction of the roundabout and subways in 1958, Rodney Gordon’s Faraday Memorial in 1961 (the stainless steel box grade II listed in 1996) and the country’s first fully enclosed shopping centre by Boissenvain & Osmond in 1965. In May 1970 the first residents moved into Perronet House and the following year it was commended in the government’s national “Good Design in Housing Awards” for its “boldness and conviction” (download the entire awards database 1950 – 2003 here. The architect Roger Walters was knighted the year after. 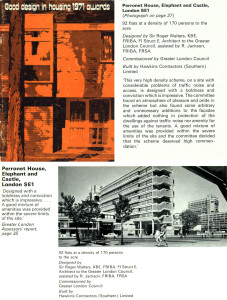 In The Guardian’s obituary it said of Sir Roger, “his professional hallmarks were grand imagination and enthusiasm combined with meticulous attention to function, process and form”. The Independent’s obituary described Walters as, “rejecting the excesses of high-rise construction of the 1960s, he aimed at “low-key architecture, subtle and human, which the occupants would really enjoy”, which is very true of Perronet House. Before retiring in 1978, Walters had guided the redevelopment of Covent Garden and the commissioning of the Thames flood barrier. The Independent also went on to reveal, “For all his softness, Roger had a hard head and wonderful wit. More than 40 years ago, he won a competition organised by The Sunday Times, to compose the headline for its 10,000th edition in March 2017. True to form, it was brilliant and simple: Government computer resigns”.

In 1987 changes were made to the ground floor and podium levels of Perronet House. The open space between the pilotis was filled in to create new flats for disabled residents and the communal podium level playground was built over. The photographs here show the original form of the building. The communal interior was refreshed at this time with beige and orange wall and floor tiles added to the podium reception and lift lobbies and a series of interlocking brick planters were created at the foot of the building on London Road. In 2004 the exterior of the building was beautifully renovated, concrete repaired by Hilton Abbey and the original galvanised steel windows painted blue and white instead of their original monochrome scheme – most panes are surprisingly double glazed from new. The only significant modification since then was substantial fire safety upgrades in 2010 which replaced communal ceilings, rearranged communal lighting and renewed the mains wiring into each flat but barely changed the appearance of the interiors.

In 2012 an image of Perronet House was exhibited in Venice at the 2012 Architecture Biennale The image came from RIBA’s archive, you can view it here.

We assume our house is named after the 18th century French engineer Jean-Rodolphe Perronet.

Flats at Perronet House have opened for public viewings as part of the Open House London weekend in September in 2013, 2014 and 2015.